"A Christmas Carol Times Two!", a dramatic reading performance of Charles Dickens "A Christmas Carol" combined with traditional 19th century English Christmas carols will happen on Thursday, Dec. 13 at 7PM at the Franklin United Methodist Church, 82 West Central Street in Franklin, Massachusetts.  Actor Al LePage will become "Englishman Thomas Hutchinson, Traveling Thespian" complete with English accent, clothing of the period and other accoutrements for the dramatic reading part.  Organist and local minister Rev. Dr. Dianne Carpenter will weave piano music between various scenes to set the tone for what's to come and entertain.  This is a special benefit performance sponsored by the Franklin Historical Commission and hosted by the Franklin United Methodist Church with all proceeds to benefit the Franklin Food Pantry.  Admission is $10 per person and the performance is best appreciated both by adults and children 7 years of age and older. Tickets go on sale Nov. 15th and their advanced purchase is required by visiting the Franklin Historical Museum located at 80 West Central St. in Franklin Thurs. 5-8PM, Sat. 10AM-1PM and Sun. 1-4PM.   Doors for the performance open at 6:30PM, the fun begins at 6:45PM, and seating is general admission.

"One of the best gifts I received this year," begins actor Al LePage, "was an email from Franklin, MA.  A Mary Olsson called me about doing my Christmas Carol performance in the first town ever named after Benjamin Franklin.  And during our follow-up phone conversation, the gift kept getting bigger and better, like unwrapping one box only to find another and yet still another inside that one!"
Photo Credit: David Krapes 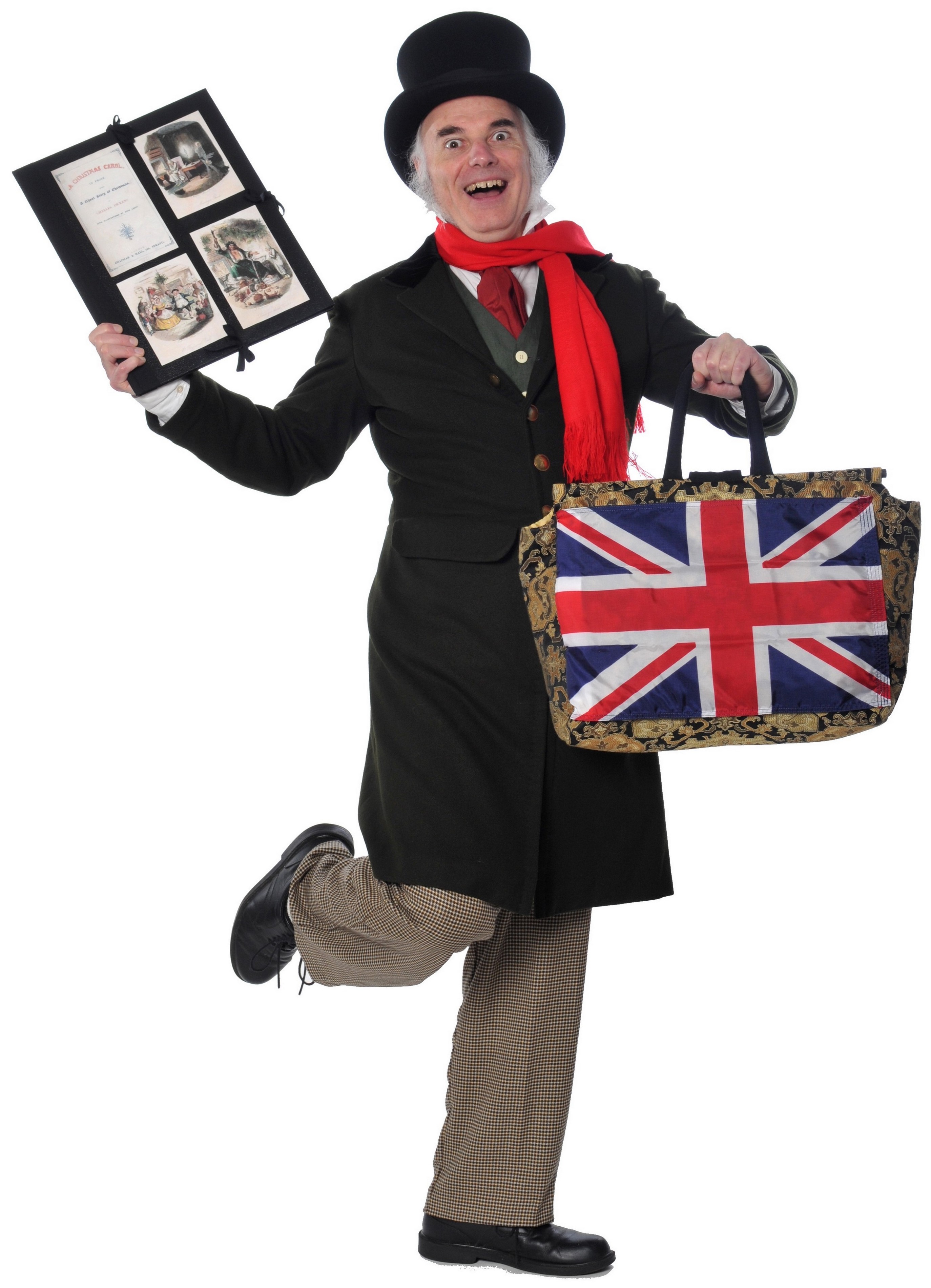 LePage entertains appreciative audiences with his one-man "solo" of Dickens' Christmas Carol as Victorian-era "Englishman Thomas Hutchinson." His abbreviated performance is not only based upon Dickens own historic public reading version, but are also done just like Dickens did simply by using his voice, facial expressions, gestures and movement to create all 18 characters -- accents and all -- plus sound effects, too!  From Scrooge to Tiny Tim, from Marley's Ghost to Mrs. Cratchit, there's howls and growls, bangs and bongs, a dance with a song, lively laughter and heartfelt tears.  Since he's playful, likes to experiment and believes in seizing the moment, even he doesn't always know what's going to happen next.  And, before each reading, he's definitely got what could aptly be called “his stories” to tell both in “the year” and the place he's performing to connect, interpret, and share history with the audience.  He loves to play to -- and with -- audience members to bring history alive, which will quickly become evident when you first encounter him.  He's sure to bring you lively laughter, and hopefully some tears, during his dramatic reading of Charles Dickens' "A Christmas Carol.'

"Gifts, oh yes, gifts," continues LePage.  "The first, of course, was the invitation to perform.  I gave the second gift and said I'd perform for free with the idea, though, that all the money would go to help keep hunger away from local doorsteps.  And it all started coming together with other people giving gifts too!  The Franklin Historical Museum would provide the volunteers, the Franklin United Methodist Church would freely host and its very own 'Pastor Dianne' also agreed to play the organ for the event!  The Franklin Food Pantry agreed to receive all the money, which in itself, accepting a gift that is, is a sort of gift, too, to the giver, right?  This wasn't just another event, this was already becoming a real community event, where everyone involved was being generous with their time, talents and resources."


Hunger close to home is a serious issue both locally and nationally.  At any given time, people sometimes have to make choices between food and other critical survival factors such as heat, housing, medical care or transportation.  In Massachusetts alone more than a quarter million children, that's almost 1 in every 5 in the state, often face hunger, and almost half are from families that don't qualify for government programs like food stamps or free school lunches simply because they earn too much money.  And also according to Map the Meal Gap: Child Food Insecurity, a report issued last year by The Greater Boston Food Bank (GBFB) and the national network of food banks, Feeding America, childen who don't eat what they need for strong healthy brain development may never recover their lost potential for cognitive growth.  The report goes on to say that besides stunting their intellectual capacity, it could also affect learning, social interaction and productivity, diminishing what could have been a child's eventual contributions to society.

"We're still seeing probably a 25% increase this year over last year, and last year was a 25% increase over the year before that, too," says Steve Sherlock, President of the Franklin Food Pantry, "so the demand even for a fairly well to do community, the number of hungry and at risk continues to increase.  It's something that's not very well talked about, but the need is something the community fortunately is very able and willing to support.  So we want to continue to get the word out, continue to get that support, and this special event will help us do that."

Dianne Carpenter started playing piano at age 6, took up the violin a few years later, and by the time she was a junior in high school landed her first job as a church organist!  She pursued her music education degree from Lowell State College, went on to teach music in area schools, but always remained a church organist or choir director as that "teachers second job" to make ends meet.  She eventually decided to get even more serious about her life in "music ministry," went back to school to receive a Masters of Sacred Music from Boston University, but continued to teach school.  A few years later, though, the economic situation for funding education statewide in Massachusetts took a turn for the worse and teaching jobs were threatened.  All this forced her to do some soul-searching, and in the end she decided her journey was now to be the path of pastoral ministry.  She sold her house, went back to school yet again, and eventually earned both a Masters of Divinity from Andover Newton Theological School and a PhD in Christian Social Ethics from Boston University Graduate School.  She's been a minister in the New England Conference of the United Methodist Church for nearly two decades, serving in Natick, Spencer, Belmont, Hamilton and Brewster Massachussetts.  She currrently serves as minister of the United Methodist Church in Franklin, MA, and continues to publicly perform both on organ and piano, typically now only playing the violin for her own enjoyment.

"We all have gifts, and God wants us to be generous with those gifts, asking us to share them," begins Rev. Dr. Dianne Carpenter, pastor at Franklin United Methodist Church.  "And this event is an opportunity for the community not only to be entertained, but also become aware of the real meaning of Christmas, God's passion for the entire world as reflected in providing the resources needed by the food pantry so everyone served can celebrate the season, too."

LePage got his start bringing history to life through improvised portrayals of real people from the past and has been seen by thousands during the eight years he appeared at events with the National Park Service, historic sites, museums, and other venues in the Pacific Northwest. He's appeared on the PBS TV History Detectives series as everything from a bartender to Robert E. Lee!  He's also written and produced his own one-man historical dramas, and recorded his “short” performance version of Dickens' classic holiday story as a one man radio show, an Oregon Public Broadcasting Radio production that premiered last year on Christmas Eve.  LePage has even given “historical performances” on location in Boston where, and once when (same calendar date), Dickens did in 1867!  "Performance with passion and purpose" is the mission of his Great Stories Alive! theater company shows.  “Englishman Thomas Hutchinson” was first created to share history as an “average guy” but who somehow always seemed to turn up when and where historic events happened!  He now lives on as a Victorian-era “Traveling Thespian” giving performances of Dickens' Christmas Carol to benefit charity, having done so since 2006.  Last year he even traveled to England to perform the Carol for the very first time.  LePage loves to improvise and believes all the world's a stage, and every audience member a potential player, so watch out!

"As an actor, the show itself is my work," says Al LePage, "but as a person my real work is about generosity, not only being generous myself, but also cultivating it in others.  And what's great about generosity, about giving of oneself, is that it does good things both for the giver and the receiver, too.  Tis better to give than to receive, as the saying goes.  So give yourself a special treat this year and know that the ticket you buy isn't really just about a show, it's also about generosity, it's about helping to feed someone, it's about loving your neighbors as yourself."

"I've been talking about the upcoming event for the last three months," says Mary Olsson, Franklin Historical Commission board member, "and everyone is so excited, I know it's going to be a sell-out!  Get your tickets fast!"

The Franklin Food Pantry is a non-profit organization engaging the local community to provide food and other resources needed to sustain a healthy life, serving over 2,500 local residents. If you need help, want to help or learn more visit FranklinFoodPantry.org.

The Franklin United Methodist Church is a welcoming congregation that has a wide diversity of age, vocation, interests, and journeys. We are a people called to be in ministry with one another in the name of Christ and affirm our diversity as a strength chosing to make our journey together. We believe the Church should be a place of nurture and growth that enables persons to live out their faith most effectively as disciples of Jesus Christ; that calls others to become disciples; and reaches out to the community and the world with our gifts and service.  Visit FranklinUMC.org to learn more.

The Franklin Historical Commission provides for the preservation, protection, and development of the historic and archaeological assets of Franklin and the Franklin Historical Museum is a mixture of old and new: upcoming events at the museum, some information about the history of the town, a growing archive of documents and photographs of the town's past, and a blog for conversing with folks about the museum, its contents, or history in general, located at 80 West Central St in Franklin. The activities of the commission encompass many areas including: research on places of historical or architectural value, working with the State Archaeologist in conducting surveys and reporting on sites, supporting educational activities, establishing historic districts, providing information for genealogical searches, and operating and maintaining the Franklin Historical Museum.  Visit FranklinHistoricalMuseum.com to learn more.

GENERAL CAPTION SUGGESTION for IMAGES:
"Englishman Thomas Hutchinson, Amateur Thespian" as portrayed by Al LePage is sure to bring lots of  laughter,
and hopefully some tears, during his upcoming dramatic readings of Charles Dickens classic "A Christmas Carol".

NOTE TO MEDIA:  Embedded images are high resolution and offered for free use by the print media
for stories related to these performances and may be cropped, color-balanced and adjusted as needed.
Please credit "MAH Records" and the photographer “David Krapes” accordingly. Thank you.